An elite SAS fighter inside Australia’s toughest and most secretive combat force. This compelling bestseller is now part of the HACHETTE MILITARY COLLECTION.

Clint Palmer has spent much of his adult life in the SAS and has fought in this elite military unit as it developed from its fledgling beginnings into the highly trained, specialised fighting force it is today. He is an insider with the long view and this is his unique story of life in the SAS.

As a bush kid in the Northern Territory of Australia, growing up in a one-dog mining town, Palmer’s best friends were mostly Aboriginal kids, and the outside world barely existed. But he always had one driving ambition – the army. Enduring the toughest of tough training, Palmer soon demonstrated his fighting capabilities and became part of the Australian SAS. So began almost thirty years of service. We go with him to Iraq and Afghanistan, where he is at the heart of some of the worst fighting in Operation Anaconda in the Shahi-Kot Valley in 2002. He lets us in on what it’s like to have made well over a thousand parachute jumps, many of them in terrible conditions and into treacherous terrain which may have ended not just his career but his life. And he shares with us how this adrenalin fuelled world has become a lifelong commitment. Palmer is the man who knows the regiment almost better than anyone, so SAS Insider really is the inside story of the SAS – and a gripping account of one Australian soldier’s life at the sharp end. Now part of the HACHETTE MILITARY COLLECTION. 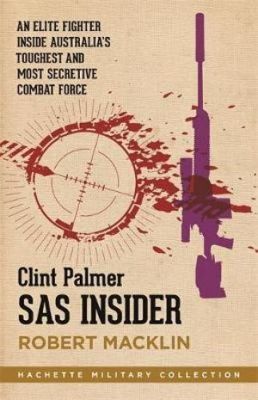 A rare beast in this genre, this honest, insider’s account of the dark arts of sniping and special forces